For all Club competition events they must be played in accordance with the Rules of Golf as adopted by the Royal & Ancient Golf Club of Scotland, in conjunction with such Local Rules which are applicable to Queens Park Golf Course

The Match Committee will comprise of the Club Captain (Chair), Club President, Club Secretary, Club Vice-Captain, and Club Handicapper. Male or Female Members may be seconded onto the Match Committee as determined by the General Committee.

For both Lady and Male Members, a full member of a Golf Club registered with Golf Australia may sign a score card for gaining a handicap.

Guests from other clubs may play six times a year in club competition but must be approved by the President or Captain upon each request, they are not eligible to win or qualify for special events listed in the Members Fixture Book, except Presidents Day.

Neat casual attire should be worn on the course and in the clubrooms.
The Club would appreciate that members refrain from wearing hats or caps in the main clubroom area.
Consuming alcohol or drugs on the course proper during competition games is not permitted.

Club Championships for Male Members must be played each year and has priority over all Club events.

Qualifications to Play: Players must be full financial members of Queens Park Golf Club Inc. at the time of the first (1st) qualifying round of the Club Championships, and have been a member of the Queens Park Golf Club for six (6) months prior to the playing of the first (1st) qualifying round and hold a current GA handicap. If a member has not qualified for this period then it will be at the Match Committee’s discretion to allow the member to qualify. A member must have played and returned cards in no less than ten (10) singles competition events from the last current Club Championship rounds played, and until the first round of the forth coming Club Championships. If a player has not played in 10 rounds then it will be at the discretion of the Match Committee to give the member permission to play. Players chosen to represent the Club in any District events, shall have those games recorded as qualifying games. .

Four pairs to qualify. – Final round will be Match Play asper Fixture book.as in the Fixture Book

Winter and Summer Eclectic Events and entry fees are as per the Fixture Book. Scores from singles events in the Club fixtures are the only scores acceptable. Scores may be entered by the player at any time. Scores from disqualified cards are not acceptable.

Players competing in match play matches are to take note that strokes for all knockout matches will be played as per the stroke index on the score card.

The qualifying rounds will be held on the dates set down in the Fixture Book. Each round in both events is to be completed by the dates shown, or the players concerned will be subject to disqualification at the discretion of the Match Committee. The player(s) first named in each match shall be deemed to be the challenger(s) and will be responsible for arranging the match. In the event of the players not being able to agree on a suitable time and date to play, the Match Committee will allot a time and date.
In the event of a match being undecided after 18 holes of play, the match will continue from the 19th hole until a result is achieved.
All knock-outs are to be played from the back markers. In the case of flooding or when temporary greens are in play, permission to play may be granted at the discretion of the Match Committee. No matches are to be played concurrently with competition rounds. Games may be played on any day of the week. The number of strokes and where taken are to be as indicated on the current score card. Maximum handicap of 36 to applies.

Time slots are allocated to Male and lady Members for Saturday competition events. For two weeks prior to each event, the time-sheet will be available on-line at the club website www.queensparkgolfclub.com, members without internet access must contact the Pro-shop to add or cancel themselves from the time-sheet. Members must pay the nominated entry fee to reserve a booking and to play in the competition field.
Additional booking times are available by entering your name in a vacant time slot or by arrangement with the Captain or the nominated Pro Shop representative. One player may enter four players names on the time sheet, on the same line where there are vacancies.
All players must notify the Pro Shop if they are not available to play on the allotted time by Friday prior to the Saturday event. Failure to do so may at the Match Committees discretion incur a penalty.
All players must report to the Pro Shop on arrival and be ready to hit off 30 minutes prior to their tee-off time. Frequent offenders will incur a penalty from the Match Committee. The field will not be held up for late comers.
A player cancelling from a 4BBB mixed or similar event is obliged to notify their partner(s). The field will not be held up for late comers and they will be called at a later time if space is available as directed by the Pro-shop attendants.

The entry fee for all events will be determined by the Match Committee from time to time, any increase in fees, must be ratified by the General Committee.

All players must report to the Pro – shop and pay the competition fee.
To obtain a score card: Enter your last three digits of your Golf Link card and all necessary information to play will be recorded on the score card. The computorised score card will normally be the only card accepted for all Club events.
In the event of a systems breakdown: In the event of the computer system not operating, enter your name on the competition sheet provided, obtain a green fee score card and enter your entry number, name and handicap on the card.

13. Nearest the Pins events:
For all Club events, if a player is disqualified for not completing, during or after the completion of his or her specified round, any N.T.P. won by that player will be still awarded to him or her. Nearest the pins are not an integral part of any Club event.

All complaints and queries on rulings, etc. regarding the playing of golf matters are to be directed to the Captain or his/her representative, All of these concerns will be dealt with by the Match Committee and its decision shall be final.

Ground staff: No member(s) shall approach the City of Greater Geelong Green Staff. This is the prerogative of the Club Captain with input from the Lady Captain, on matters concerning the golf course and its facilities. Administration: Members must direct his or her enquiries or complaints in writing to the Club Secretary for consideration by the General Committee. No member is to approach the City of Greater Geelong regarding matters concerning the Administration of the Golf Club, but direct their query through the Club Secretary.

The only Club members’ names that can go on the “Hole in One” board are those obtained in a sanctioned Queens Park event.

Selling of competition/raffle tickets or canvassing of members to buy such tickets for outside organisations without the permission of the General Committee is prohibited.

Grades:
“A” Grade –0 to 13
“B” Grade – 14 to 20
“C” Grade – 21 to 36
For 8 to 40 players there will be one (1) grade
For 41 to 80 players there will be two (2) grades
For 81 or more there will be three (3) grades
$10 for all Nearest the pins (this is at the Match Committees discretion)
Lady Members’ Voucher allocation:
Ladies competition prize vouchers will be at the discretion of the Ladies Match Committee. Any changes to these vouchers must be ratified by the General Committee.

Full obligatory Insurance.
Is applicable to all members

Any new member elected to membership in addition to the entrance fee shall pay a pro-rata amount of the annual subscription for that year.

Lady and Male Members Conditions of Play and Special Events are an integral part of the Queens Park Golf Club Inc. By-Laws.

Any changes to the Ladies Conditions of Play will be given to the Club Secretary.

The use of ride-on carts will be allowed in all Club competitions.

The use of ride-on carts, is allowed in all Club Competitions.

Lady Member’s Voucher allocation:
Disbursement of Ladies match fees will be at the discretion of the Match Committee of the Ladies Sub-committee. Any changes to these fees must be ratified by the General Committee.

24. Slow Play. Slow play will be closely monitored and players maybe penalised, at the discretion of the Match Committee in accordance with Rule of Golf 6-7. 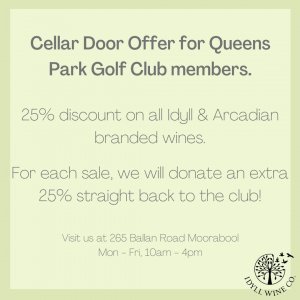 Queens Park Golf Club Inc. © 2021 All Rights Reserved
We are open with some restrictions
Here’s the directives from Golf Australia…
Operations Advice – Regional Victoria
Regional clubs and facilities may operate from 12:00 am Monday 27th September.
Clubhouse Operations – Regional Victoria
Food and beverage service – Seated service only with a maximum of 30 people outdoors and 10 indoors subject to meeting the density limits of one person per four square metres.